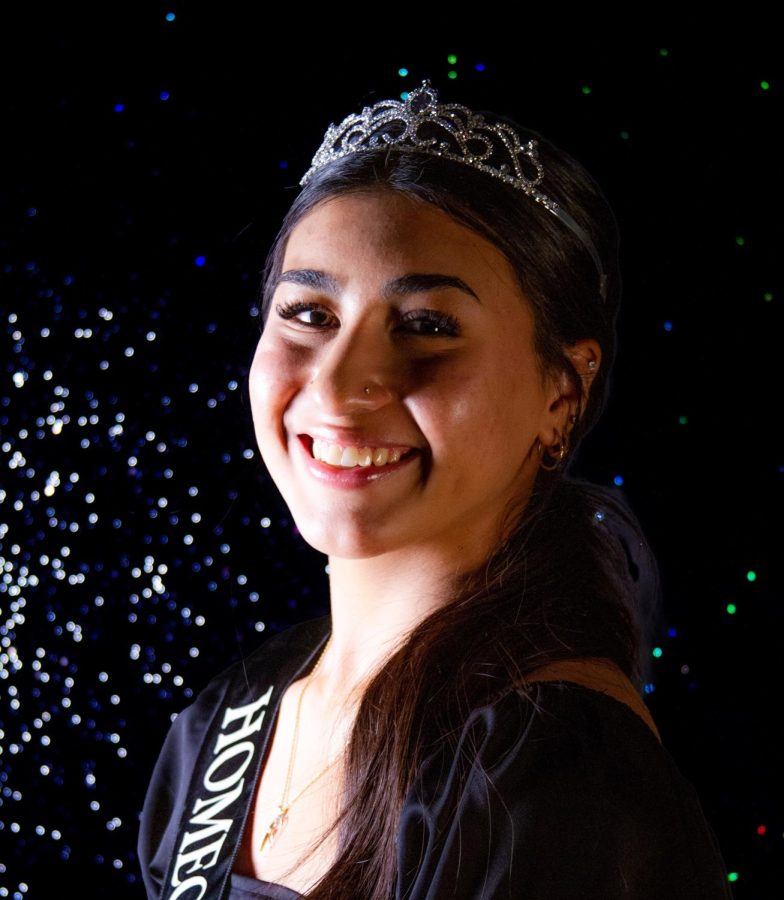 Stephanie Alvarez is a Link Crew leader and 6-year member of AVID. She is running for 2022 Homecoming Queen.

The Benefits of Letting Go

Stephanie Alvarez struggled with shyness and a fear of judgment. Once she let that go, she’s on the precipice of becoming the next Homecoming Queen.

“I was unsure if I wanted to run,” said Stephanie Alvarez, who was surprised when she was nominated by Link Crew to run as Homecoming Queen.

“I just decided to go for it.”

At first she was unsure what her plan was for running, but she took a leap of faith. She ran together with Samay Ramachhita, one of her best friends in Link Crew, and they put together a campaign to drum up interest in their bid for Homecoming Court.

They both made it, and now the thought of being a part of Homecoming Court has become reality. Excitement is now building around Stephanie as she gets closer to halftime at Thursday night’s game: there’s the pep rally and the parade to look forward to.

This whole experience is completely new to Stephanie. She will be the first person in her family to run for such an honor, and that includes running for anything at the high school level. And her family is proud of her for putting herself out there and investing in the school culture.

“To see them proud and excited for me makes me just want to push more,” she said.

Pushing herself to do more is part of what Stephanie such a special person. When she started at CHS, she was quite shy, surrounded by a small group of her closest friends. She didn’t want to branch out, or try anything.

“I’m a person who really cares about other people’s opinions,” Stephanie said. “And it was hard for me to let that go.”

It took a pandemic and forced quarantine to show her why letting that fear go was so important. During the quarantine, like so many of her classmates, Stephanie’s grades plummeted. “I lost motivation because I wasn’t around a good environment like at school,” she said. “It’s fun here because there’s people who also like school, which pushes me.”

So when Stephanie returned to CHS for her junior year, she was ready to go with the shove. She joined Link Crew on the recommendation of a couple former leaders who saw potential in her. And she invested in the school culture.

Now, she’s a stronger student, a strong leader, and possibly Colton High’s next Homecoming Queen. All because she put her anxieties aside and pushed through the fear.

“I’m glad I did run because now that I have it has become fun,” Stephanie said. “Not something I would have done myself.“