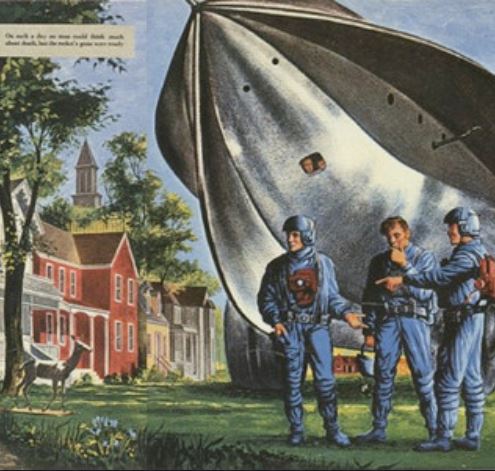 Ray Bradbury’s influential sci-fi/horror short story “Mars is Heaven!” was first published in 1949, but reprinted here in Esquire Magazine in 1950. It tells a frightening story about a group of astronauts on a mission to Mars who discover that the place looks like a mid-20th century American small town, and all their dead relatives are there!

Ray Bradbury pens one of the scariest moments in American literature by revealing that "Mars is Heaven!"

Ray Bradbury was a masterful writer in the mid-20th century. His short stories, like “A Distant Sound of Thunder,” “I Sing the Body Electric,” and “The Veldt” made him a household name for fans of horror, dark fantasy, and speculative fiction. Then, of course, he wrote classic novels like “Fahrenheit 451” and “Something Wicked This Way Comes,” which defined their respective genres by combining a pining for days long gone with the sober reality that those days were probably never what you thought they were.

Nothing captures this dark nostalgia better than his 1948 short story “Mars is Heaven!” Later collected in his seminal anthology, “The Martian Chronicles,” this story is about a group of astronauts on an expedition to the planet Mars after two previous missions had failed. Upon arrival they discover that the Mars they expected to be a dry, dusty, uninhabited wasteland actually has a thriving community . . . that just so happens to look just like the midwestern small towns Disneyland’s Main Street is modeled after. Additionally, the astronauts are shocked to discover that their deceased loved one are the citizens of this town!

Of course, the haunting, traumatic twist is that once the astronauts let their guards down and start to spend time with their grannies and aunties and parents, we learn it is too good to be true. This leads to one of the creepiest moments in American literature when, after all the astronauts are killed in their sleep on the first night by their dead relatives, all those relatives stand around a mass grave and their faces melt to reveal the aliens underneath, who had used mind reading powers to trick and murder the invaders.

This is a science fiction story that has to be read to be believed, using our love and fears about the afterlife against us to provide an absolutely terrifying moment of science fiction.