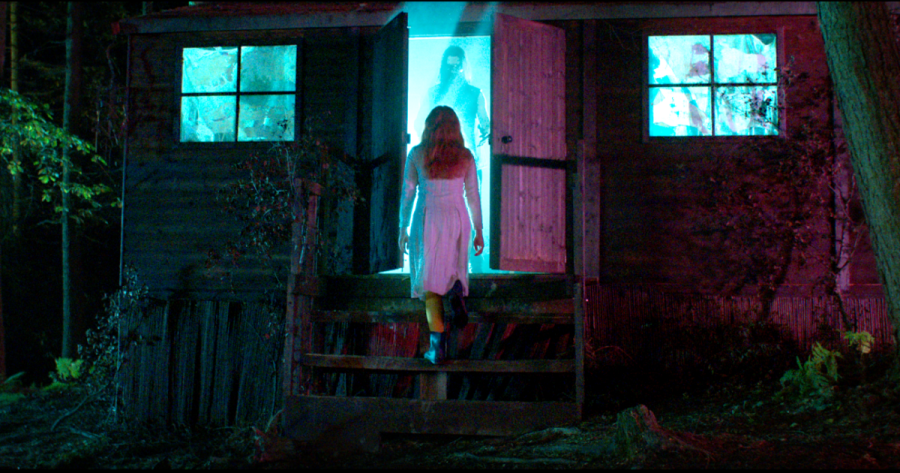 “Censor” (2021) is a modern horror movie that looks back at the “video nasties” era of the early 1980s in Great Britain. It is packed with tons of creepy moments like this one.

The history of "video nasties" in the UK serve as the backdrop of 2021's most original horror movie, "Censor"

In the early 1980s, as home video became more accessible to people in England, the UK government began to censor films being produced and distributed in the country. Some believed this was part of the Margaret Thatcher administration’s efforts to create cinematic boogeymen to keep everyday citizens from noticing how their legislative policies put more and more people out of work, which led to a rise in crime throughout the country.

These censored films grew to be called the “video nasties.” They were mostly low budget horror films imported into Britain from other countries featuring excessive amounts of blood, violence, and sexuality. To modern audiences, many of these films are considered cheesy goofy, but in the early 1980s, they were symbolic of an attitude of despair and anger that had come to consume Britain.

In 2021, British filmmaker Prano Bailey-Bond, directed a horror film called “Censor” set entirely during this period of British history. It tells the story of a British censor named Enid Baines (Niamh Algar) who finds her world crashing down when she believes to have seen her long missing sister in a brutal horror film called “Don’t Go to the Church.”

The scene in which Enid watched “Don’t Go to the Church” for the first time in a censor screening room is one of the film’s terrifying highlights. The film, we learn, was hand-picked by its fictional director Frederick North (Adrian Schiller) for Enid to watch, as she has become quite the popular censor after a mistake she made draws public attention. The imagery of two girls in the woods wandering into an abandoned church with its dilapidated face is nerve wracking. And once the violence starts, it is easy not only to see why Enid is terrified, but why a movie like this might find itself censored.

“Censor” is one of the best horror films of the past few years. It’s a slow descent into madness, leading to a sucker punch of a finale.

“Censor” is currently streaming on Hulu.

Donate to The Pepper Bough
$1500
$2000
Contributed
Our Goal
Submitting donation...