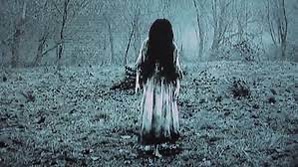 In “The Ring,” the spirit of a vengeful girl named Samara haunts a videotape whose viewers receive a call giving them seven days to live.

The line between fact and fiction is blurred when Samara climbs through a TV set.

In “The Ring” (2002) we are confronted with the deadly idea that the images we put in our heads may actually kill us. In the film, there’s an urban legend about a videotape that when watched causes the watcher to receive a phone call issuing a death sentence in seven days.

While the 2002 film is a remake of the 1998 J-Horror film “Ringu,” in many ways it surpassed the original. Naomi Watts stars as Rachel, a news reporter tracking down the truth about this videotape after one of her family members is tragically murdered. Eventually she watches the video and gets a call as well.

The grand finale of “The Ring” is one of the most memorable scenes in American horror history. After Rachel believes she has solved the case and put an end to the evil that possesses the videotape, we get quite a surprise when the little girl, Samara, haunting the tape rises on the screen from a well, drenched in water, and begins creeping towards the camera, hair hanging over her face, water pooling below her. In a moment of absolute terror, Samara climbs out of the television and into the real world.