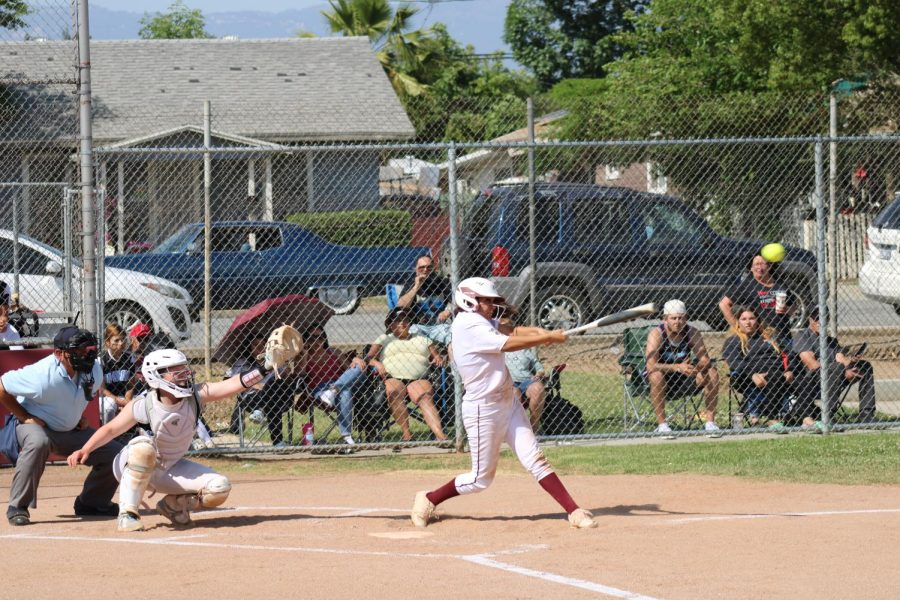 Giuliana Danovaro hits an RBI double in the fourth inning of the Yellowjackets' 7-3 victory over San Gorgonio.

Colton, CA—With a second straight CIF playoff appearance on the line, the Yellowjackets took to the diamond against the San Gorgonio Spartans in the San Andreas League tournament on Tuesday. On the strength of huge performances by Giuliana Danovaro, Zerena Acevedo, and Nalyn Hull, they trounced the Spartans 7-3 to earn the playoff bid.

The day started off looking a little shaky, as starters Madison Barrera and Stephanie De La Cruz were both out of the lineup with undisclosed illness. Danovaro received the call to put aside the catcher’s gear and start at third, putting sophomore Danielle Campa behind the plate. Left fielder Susana Corbeton took over for De La Rosa at second base, with junior Justeen Robledo taking left field duties.

The moves paid off. Danovaro went 4-for-4 at the plate, and Corbeton made some outstanding defensive plays at second, including a diving catch during the third inning that stopped a potential rally by the Spartans.

“It was a good hitting day,” Danovaro said. “I just went up there with a focused mindset and decided to put the bat to the ball . . . and it worked!”

The Yellowjackets got on the scoreboard first in the bottom of the first inning, with Nalyn Hull, who went 3-for-4 on the day, driving in Danovaro. The Spartans tied things up in the second on an RBI single by Jocelyn Mayoral.

Then Acevedo took over, shutting down 8 of the next 9 Spartan batters. This gave her teammates time to open up their lead with two runs in the third, one in the fourth, and two more in the fifth, putting the Yellowjackets up 6-1 going into the sixth inning.

In the sixth, the Spartans staged a comeback, loading the bases for Brooklyn Garcia’s two-RBI single. Acevedo left the game allowing 3 runs on 4 hits with 6 strikeouts, and Nalyn Hull took to the mound and put an end to the Spartan rally.

Acevedo summed up the game experience: “It’s cool to come out here and play with my life-long friends, and I’m excited to play in the first round of CIF.”

Now, the Yellowjackets travel to Carter High to play the undefeated Lions (14-8 overall) for the last game of the season. Both teams have earned CIF playoff bids, so the game will have no bearing on the standings, but will be the perfect opportunity for the Yellowjackets to gear up for their second straight playoff push.

“I knew we were gonna do it,” said Corbeton. “We just had confidence, so we pushed through and made it. I’m proud of us.”

Notes: The JV Yellowjackets softball team finished their incredible season with a 19-4 victory over San Gorgonio. Their team celebrated their remarkable 15-1 overall record (6-0 in San Andreas JV League) after the game by pouring a chest of water on coach Shilo Sutton.