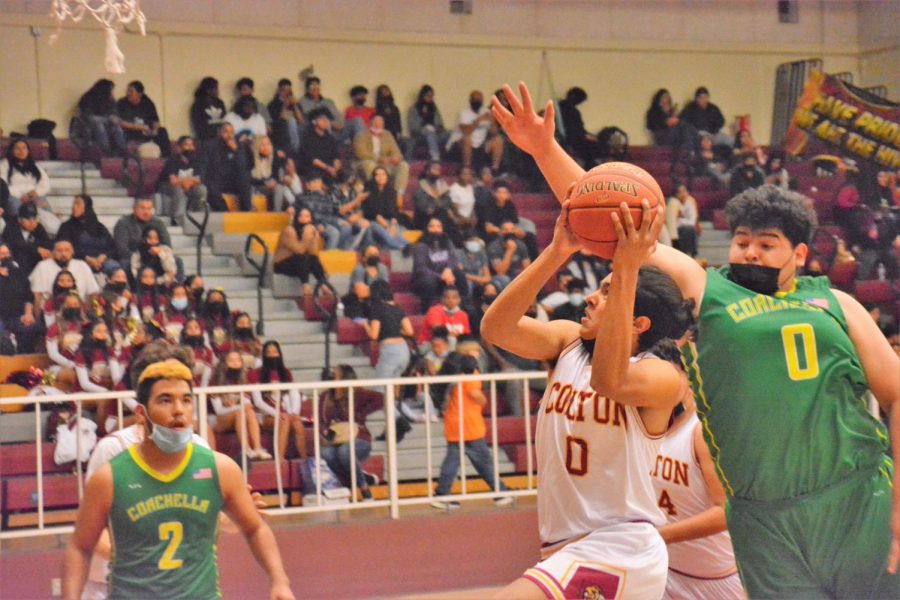 Aaron Valencia rises to drop in two of his team high 17 points as the Yellowjackets defeated the Coachella Valley Arabs 49-46.

Colton, CA—On the strength of a dominant second quarter performance, the Yellowjacket boys’ team held on for a 49-46 victory over the Coachella Valley Arabs Friday night.

This was their first home game of the season, coming off a loss on Tuesday to Rialto. In front of a packed crowd of excited fans, the team, led by the backcourt play of sophomore Aaron Valencia (17 points), and junior Devin Torrez (12 points, 4 steals) notched their first win.

The game stayed tight early, with Coachella Valley ending the first quarter with a 9-7 lead. Then Colton erupted in the second quarter.

That’s when Torrez went to work, scoring 9 of his 12 points, including two coast-to-coast fast break layups and a three-pointer that swung momentum Colton’s way.

In the second half, Colton kept the pressure on as Coachella Valley mounted a comeback through the tenacious play of their senior standout, Erik Lopez, who sliced up the Yellowjacket defense for seven fourth quarter points.

The Yellowjackets held firm. Junior power forward, Colton Suchil, fought hard in the key, dragging down timely rebounds and scoring half of his eight points in the second half. Gabriel Aparicio, junior guard, hot off his strong game in Rialto, added four points.

The second half belonged to Aaron Valencia. The sophomore scored two points in a first half marked by fouls and turnovers, but in the second half he was a different player. He dropped 15 of his game high 17 points on Coachella Valley with a diverse attack of drives and pull-up jumpers. Coachella Valley’s defense had a hard time staying with him.

After the game, Devin Torrez wasn’t as thrilled about the victory as the Colton fans. “We wanted to blow them out,” the guard said. “We’re way better than them.”

Head coach Kendrick Ayres was excited about his team’s effort. “A lot of our hard work started to pay off,” he said. “They all did their job, and they all played for one another, which is all we ask for.”

The Yellowjackets travel to Bloomington High School next Tuesday to face off against the Bruins in a Thanksgiving week matchup.