Rivalry heats up as Colton loses to Grand Terrace, 3-0 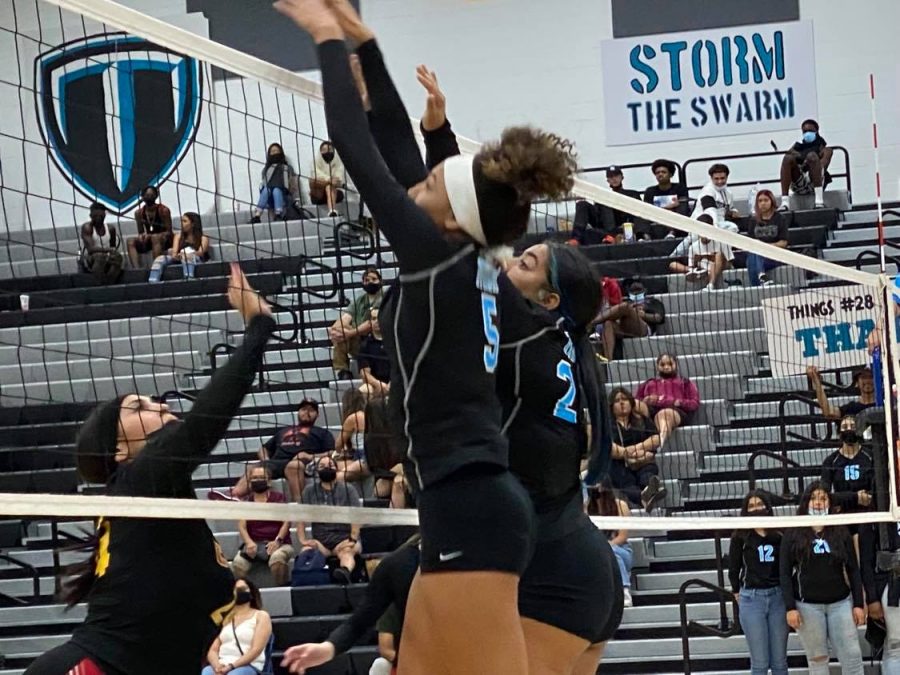 Grand Terrace, CA—Unable to hear one another amid the cacophony of screams, stomps, and shouts, the Lady Yellowjacket’s volleyball team lost yesterday’s match against their crosstown rivals, Grand Terrace High School, 3-0.

The Titans jumped on the Yellowjackets from the first serve by junior setter Annika Ferreras, and never stopped, winning the first set in a rout, 25-0. The Yellowjackets looked confused and overmatched, and their front line of Mariah Perez, Justine Estrada, and Glory Mgbemere could not put a stop to the Titan attack.

“I’m at a loss for words,” head coach Sarah Vazquez said about the game one shutout. “They thought they were ready, they came out ready to play, and then one error led to the next.”

The Yellowjackets fell behind again in the second set, but found their fight. After getting in a 23-13 hole, they went on a 7-1 run before an error at the net gave Grand Terrace the victory, 25-20.

Set two was marred by a call against the Titans for players being out of alignment during an ace serve by Jennifer Amaral. The Grand Terrace fans erupted into boos and taunts while the Grand Terrace coach stormed on the court to argue.

It was a heated moment that set up a third set that began with the Titans taking a 6-0 lead. Before the Yellowjackets could be counted out, they fought back, getting within two points at 12-10. Then the Titans went on a 13-5 tear and finished the match set, 25-15.

“I felt like our team got together towards the end,” said senior setter Marissa Herrera, who led the Yellowjackets with two aces and three assists.

The non-league loss drops the Yellowjackets to 4-8 on the season. They head to Arroyo Valley next Tuesday to face the Hawks in an important league match.