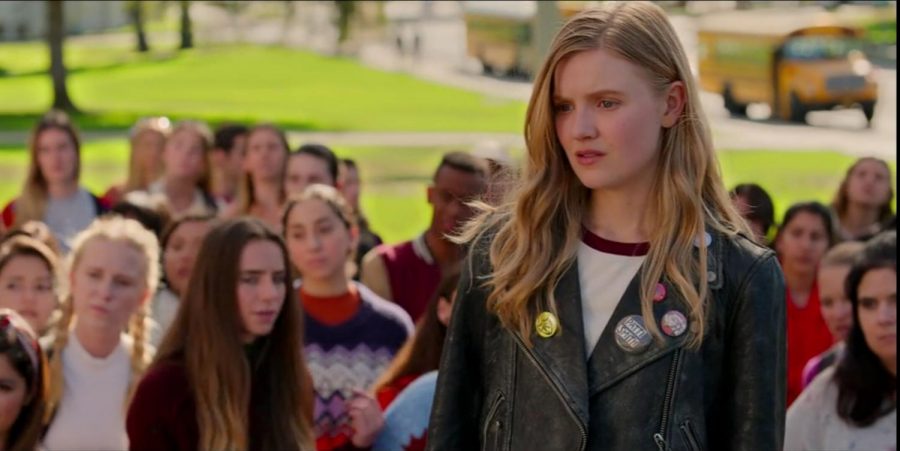 In "Moxie," Vivian (Hadley Robinson) combats the forces of sexism, transphobia, and racism by publishing 'zines that expose the ugliness under the surface at her high school.

“Moxie” is a Netflix original movie that focuses on social injustices many students face, including racism, feminism, transphobia, and sexism.

A lot of the problems discussed in “Moxie” most students go through on an everyday basis.

The issues addressed in “Moxie” all center around a teen girl named Vivian (Hadley Robinson), who after being confronted with sexism and other issues in her high school, decides to publish an anonymous ‘zine–a small DIY magazine–to confront those issues head-on.

Many of these issues, especially sexism, are a problem at Colton as well.

Recently, many girls have violated the dress code and been forced to change their outfits for the comfort of boys. Shoulders and bra straps should not be distracting, but the dress code as currently designed places an unnecessary emphasis on them that creates distraction with the assumption that girls’ attire is a temptation for adolescent boys.

In “Moxie,” a girl named Kaitlynn gets dress-coded for wearing a tank top while another girl nearby is wearing something more revealing. Because the other girl was smaller, she was ignored by the prejudicial faculty.

Besides sexist double standards related to dress code, other forms of discrimination are also a problem at Colton. A lot of people have experienced harassment, with people saying negative remarks targeting sexuality and gender identity.

While many students are trying to be supportive of LGBTQ+ staff and students, there are still some who aren’t too accepting.

There is a transgender woman in “Moxie” named CJ, but a lot of her teachers refuse to call her that, and they use her dead name with he/him pronouns. This happens to a lot of trans students here as well.

Sexism and transphobia are not the only issues pointed out in “Moxie.” Racism plays just as much a part in the movie and at our school.

In “Moxie” there is a female Black student who is voted “best ass” in a student poll. It hurts her because Black women are often highly sexualized because of their physical appearance.

The solution to these problems, in both the movie and in real life is through advocacy. However that is not easy, and not without consequence. Vivian fights for what she believes in, but realizes she may be harming the people she loves most, like her boyfriend, best friend, and her mom.

Vivian mom was an activist who stood up for what she valued. During that class poll, Vivian was crowned “most obedient,” the indignity of which leads her to embrace her mother’s activism by becoming Moxie in order to expose her school for ignoring all the social injustices people face.

Vivian changed herself and inspired people to come out of the shadows and stick up for themselves.