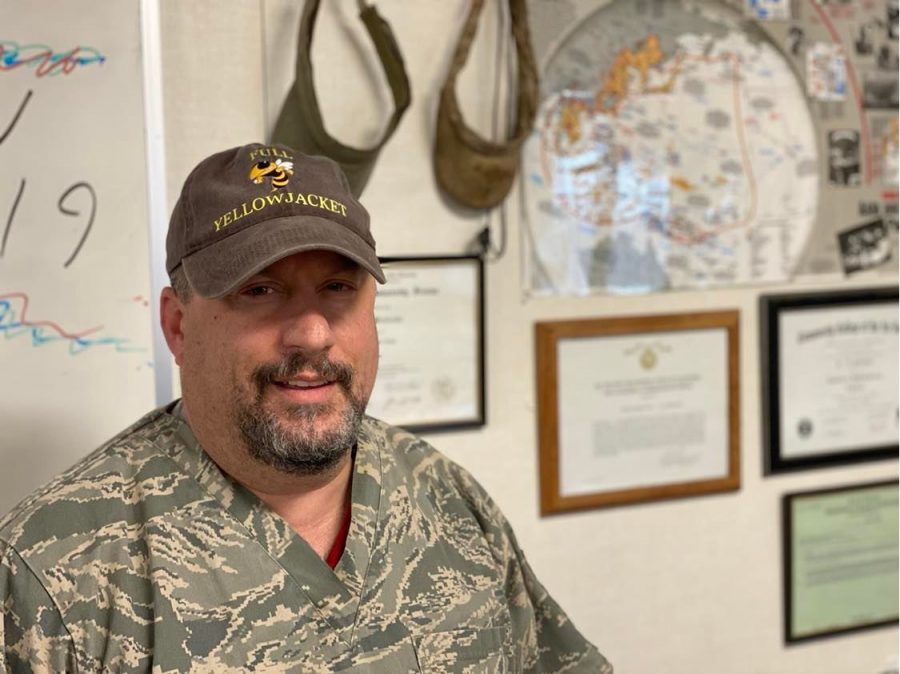 Gino Persicone uses his experience as an Air Force reservist to enrich his history lessons.

That is what the tattoo on Gino Persicone’s back reads. They are words he lives by, as both a former Air Force reservist and a history teacher.

Persicone’s desire to serve goes as far back as when he was 16-years old and decided he wanted to enlist in the military. His desire to get an education postponed doing so until he turned 21.

He joined the Air National Guard, the reserve force branch of the U.S. Air Force. Persicone served in the reserves for 15 years. Reservists sacrifice one weekend a month and 15 days a year as part of their commitment to the military.

“I was what they referred to as a ‘guard baby,’ in that I was reserves the whole time,” he explains. “Education was my highest priority.”

Two days after Persicone returned from his weekend duty, the Twin Towers in New York City were decimated in a terrorist attack. Television news exploded with stories from ground zero. People watched in slack-jawed horror as the images of planes crashing into the towers played around the clock.

“My uniform was sitting in the corner,” Persicone remembers. “I hadn’t even had it pressed and dry cleaned, so I just threw the uniform on, did a quick shave, and headed out there.” He returned to base to see how he could be of service.

“And I was glad to go because it was better than sitting on my hands, doing nothing.”

Persicone’s reserve status became active, and he was sent to Fresno, CA, where he passed out flak jackets and helmets to the 144th Fighter Wing Squadron. “You could make the argument that it wasn’t much, but it was better than sitting at home watching the news.”

It is this philosophy, combined with his experience, that Persicone brings to his classroom teaching. “It is amazing to know the difference between some of the stuff they are talking about in the history books,” he says. “It’s nice to be able to distinguish between the officers and the enlisted, between how decisions were made in history, about what it was like to be in the field.”

While his knowledge brings texture and lived experience to his lessons, it really does come back to that tattoo he wears proudly. “I believe when they say ‘it’s better to give than receive,’ it’s honestly true,” Persicone says. “It’s better to give, and my way to give was through the military and teaching.”