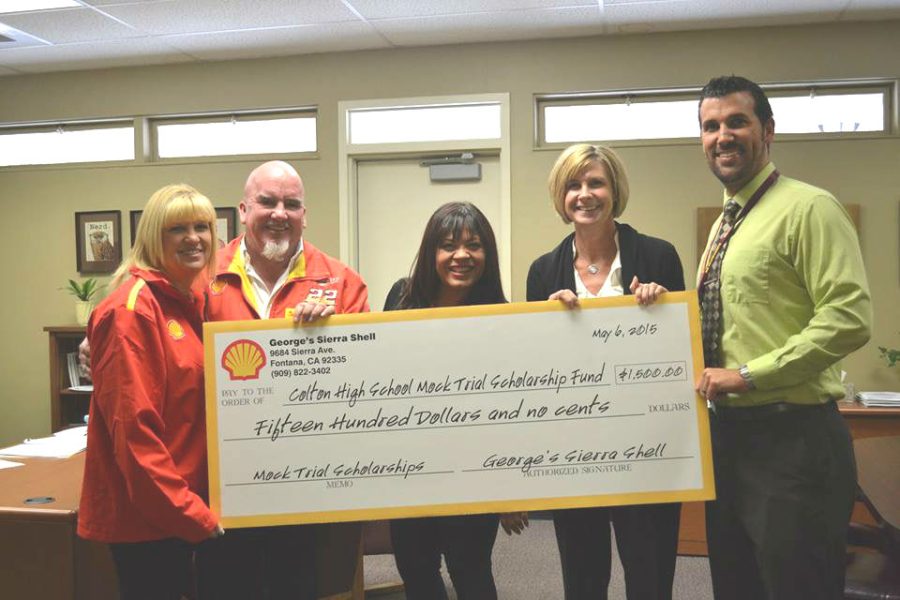 Doug and Linda Whiteman, owners of George's Shell in Fontana, present a check in the amount of $1,500 to the Colton High Mock Trial Scholarship Fund. There to receive the reward were adviser Lucy Leyva, principal Joda Murphy, and assistant principal Brian Pope.

On May 6, 2015, Colton High’s Mock Trial team received quite a gift. George’s Shell in Fontana cut them a check for $1,500 to go towards the Mock Trial Scholarship Fund.

Mock Trial began the year with a goal of raising $500 for the scholarship fund, but Doug and Linda Whiteman, owners of George’s Shell, were inspired by the Mock Trial team’s work during the school year and wanted to give more.

Facebook was instrumental in the donation. Ms. Lucy Leyva, the Mock Trial adviser, posted regularly on the social media site to promote her students’ efforts in regional competition. George’s Shell friended Leyva on Facebook, and the frequent updates impressed them. The Whitemans told the Pepper Bough, “Students came in during break, on weekends, after school, and at night, and we were touched, moved, and inspired by the efforts put in by the students.”

That year, the Mock Trial Scholarship Fund raised $5,000 and gave scholarships to 10 seniors. One of those students, homeless at the time, further impressed the Whitemans, who awarded that student an additional $1,500.

“I was really excited and it was inspirational,” Leyva told the Pepper Bough. “It was the right step into the direction of greatness.”