The Watchmen: maybe the greatest graphic novel of all time 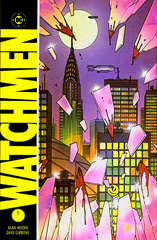 The Watchmen is an incredible graphic novel written by Alan Moore and illustrated by Dave Gibbons in 1987. The comic received a fair amount of praise at the time it was originally released, but was more recently brought back into the public spotlight after the release of the film adaptation directed by Zack Snyder in 2009. The film was a hit and sparked a new interest in the original source material for a newer generation. Although the book is about 27 years old, it still holds up incredibly well today. It is even considered one of Time magazine’s “top 100 best novels”. This is a comic book that is so well written it honestly rivals more traditional novels in its quality.

The Watchmen is set in an alternate 1985 in which the inclusion of super heroes in society has shaped the world towards a more threatening Cold War. One such hero, “Dr. Manhattan” is a super being created by a nuclear testing accident, who has the power to deconstruct and reconstruct the molecular structure of objects as well as an incredibly high level of intelligence. He was used as a secret weapon of sorts in the Vietnam War, leading to a victory for democracy in Vietnam and President Nixon’s third term in office. This victory and Nixon’s foreign policy lead to Russia invading Afghanistan and possibly sparking World War III. At the time that this comic was being written, the threat of a third world war was incredibly relatable and plausible. This is very much a story of that time, but also universal in its underlying message about nuclear warfare and war in general.

The story revolves around this conflict of World War III as a background plot device to raise tension and motivation for the villain who is eliminating the currently out-of-commission super heroes still remaining. The only vigilante still active on the streets against the laws put in place to eliminate vigilantism, is Rorschach, a gritty noirish detective with a very strong sense of justice. Rorschach begins investigating the death of his former comrade, the Comedian, when he realizes there is a “mask killer” on the loose getting rid of super heroes. The story mainly focuses on Rorschach’s investigation and the background stories of each super hero, as well as how some of those stories intertwine with eachother. This creates a very interesting lore that leaves almost no stone unturned without overstaying its welcome.

The artwork is fantastic, very realistic and gritty, with a perfect color scheme for the smog covered, grimy, and foggy New York streets. The art matches the story telling perfectly, they go seamlessly hand-in-hand complimenting each other as the pages turn.

The realistic alternate world mixed with the traditional comic book inspired story blend together to make an absolutely brilliant combination. This is exactly how our world would be shaped if super heroes enforced the law for a period of time; this is exactly how culture would differ in such a slightly altered timeline. It’s so believable without having to be entirely grounded into all of the rules of this restricted real world, which is what makes it such a wonderful experience. It doesn’t let itself be weighed down by its realism, but doesn’t go overboard on the ridiculousness of super hero tropes and is in fact self aware of the fact that it is doing this. The universe established in The Watchmen has absolutely no doubts knowing exactly what it wants to be, and it accomplishes all it needs to accomplish.

This is a fantastic book and I recommend it to comic book readers and all readers in general. I simply cannot recommend this book enough, it is an absolute page turner, I couldn’t keep myself from reading it at all times. Especially if you are a fan of the film, I assure the original source material will not disappoint.