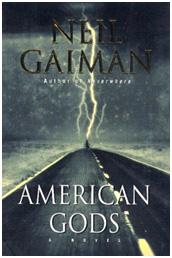 Shadow, a big man with a simple life, is released from jail to find out that everything he had is lost. On the trip back home, he is offered a job as a personal assistant/bodyguard/chauffeur to a man named Wednesday. Having nothing else to live for, he accepts. At first, Wednesday doesn’t tell Shadow who he really is, but it doesn’t take Shadow too long to find out that there’s more to him than meets the eye. As a reward to Shadow for his good work, Wednesday finally tells him that he is a god and he is planning a war against the new gods of the America (money, cars, etc.) and needs his help to gather all of the old gods in America, like Anansi, Czernobog, and Easter (just to name a few), to fight with him. “American Gods” by Neil Gaiman, takes you on a journey through both the old and new America, and through the lives of the many “American Gods“ we acquired in the making of America. There’s so much mystery that you won’t put it down until you’re done, and the ending will leave you in shock. Read it!