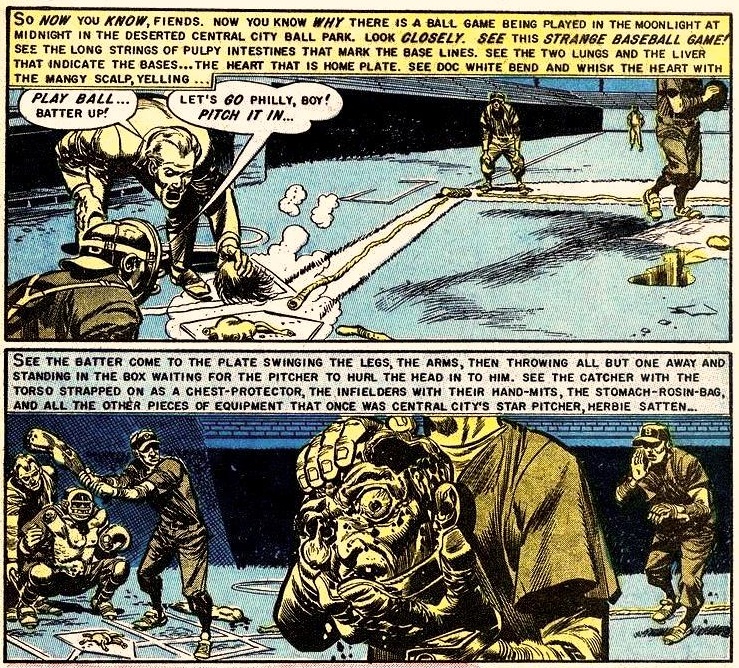 Comic book stories like this one, “Foul Play” from 1953’s “Haunt of Fear” issue 19, led many parents and child advocates to believe comic books were a leading cause in juvenile delinquency.

Every generation has its boogeyman, and for the Baby Boomers in the 1950s it was . . . comic books. Specifically horror comic books.

Due to the popularity of E.C. Comics titles such as “Tales from the Crypt” and “Vault of Horror,” parents and community advocates worried about the impact of tales of zombies, vampires, murderous spouses, and grotesque baseball games. One noted psychologist, Dr. Fredric Wertham, published a book about comic books called “The Seduction of the Innocent” and even testified against them before a Senate subcommittee.

“It is my opinion,” Wertham said at the subcommittee hearing, “without any reasonable doubt and without any reservation, that comic books are an important contributing factor in many cases of juvenile delinquency.”

Wertham’s presentation, which included a graphic slideshow, put the nail in the coffin for horror comics. Shortly thereafter, in 1954, the comics industry itself established the Comics Code Authority, a self-governing body that placed a series of strict rules on what could appear between comic book covers. Because E.C. Comics was the industry giant at the time, and the bulk of their catalog were horror and crime comics, this was as much a move to cut off their head as it was to preserve the innocence of American youth.